At times, public domain renders itself as a physical environment— perhaps a park, or plaza. Conceptually, though, it has no explicit point of reference. The public domain is built on events— the intimate exchange of strangers. The French philosopher, Michel Foucault, implies in his text— Fearless Speech— that the public domain is the engagement of space and dialogue.1

In the Athenian democracy of ancient Greece, this was the stage— the "Pnyx"— upon which a parrhesiates— a "truth-teller"— could speak. Foucault describes this act of truth-telling, parrhesia, as a sacred right of the Greek citizen. This right is exercised with risk to the speaker's own reputation, perhaps against the will of authority— but it is committed out of necessity. The parrhesiates is compelled, despite the threat of defamation, not only to speak but to be heard— to engage the public domain.

Artists and activists have acted as parrhesiates in the past, lending life to the public domain. In Foley Federal Plaza, Richard Serra created Tilted Arc which disrupted the space and spurred an intense debate on the role of the plaza and his sculpture. Public domain flourished in Zuccotti Park, and other localized social arenas across the world, when it amassed thousands of protesters during Occupy Wall Street in 2011. Other forms of political occupation, such as those tactics employed by Black Lives Matter, have even appropriated streets and highways as public domain— if only for a moment. 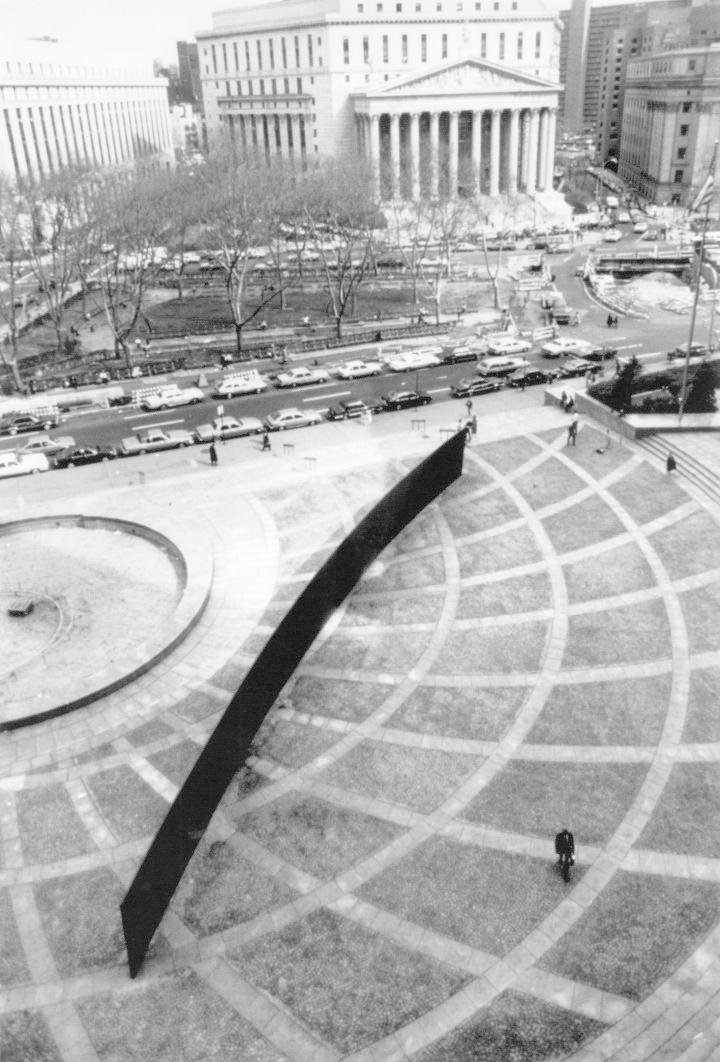 In my opinion, this entanglement of the political act and the physical space in which it unfurls drives a longing for identity. By occupying public domain, the traditional concept of "citizenship" is displaced. In its stead, the public citizen takes on a new performative role. The relationships which traditionally structure social behavior become more fluid, and any organization within this environment is typically dynamic and rhizomatic. The willing disenfranchisement that occurs upon entering the public domain gives the individual the opportunity to be heard outside of their typical role. However, the role of the "place" in public domain has gradually shifted.

Since the early 2000s, activism has increasingly inhabited a virtual space— shoring up the brick-and-mortar movement with a digital presence online. Due to the intimacy of public domain, successful movements have always relied on freedom of media. The ideas carried from the public domain depend on their ability to infiltrate popular media.2 First paper, then radio, television, and now the Internet, media mainly affords an opportunity— to expand the public domain.

Ontologically, media is quite unique. It simultaneously describes information— the "content"— as well as the platform used to communicate that information (sports or news— radio or television).3 You can only reach as long as your arm, and the arm of the media is vast— and as David Karpf emphasizes, it is dynamic. In the modern media economy, "street activism" can't get enough diverse support to generate a popular movement. The Internet has provided an incredible media platform for growth and organization en masse. However, as David elaborates in Analytic Activism: Digital Listening and the New Political Strategy (DLNPS), you have to know how to engage the Internet.4

According to Hajer and Reijndorp's In Search of New Public Domain: Analysis and Strategy, public domain is... "those places where an exchange between different social groups is possible and also actually occurs."5 While the Internet has afforded ample opportunity for such exchange, if it is unable manifest across a hybrid media ecology, then it will likely have little purpose in the expansion of public domain. As David Karpf explains in DLNPS, the hybrid media environment demands the engagement of a variety of platforms and textures. There is a complex set of rules governing the mechanisms of information ecologies, and it's no longer enough for activists to hand out pamphlets, text their friends, or create a Facebook event:

Karpf emphasizes a strict program of what is essentially feedback media— implementing the same clever analytics and algorithmic testing commonly deployed by commercial marketing firms. However, instead of deploying these methods within the context of a private-sector enterprise, Karpf stresses the adoption of these techniques by activist organizations.

Intellectuals and activists must embrace new media technology to remain socially competitive, dynamically tuning political strategies with the constant application of user-reinforced data. The organizational models of activist campaigns must compliment and augment their street movement with an agile team of media technicians and data analysts who are simultaneously acquiring contributions in numbers and capital. Douglas Kellner, a distinguished professor at UCLA's Graduate School of Education and Information Studies— closely mirroring Karpf's sentiments— directly implores activists to adopt contemporary practices in media technology:

effective use of technology is essential in contemporary politics and... intellectuals who wish to intervene in the new public spheres need to deploy new communications media to participate in democratic debate and to shape the future of contemporary societies and culture...

computers have produced new public spheres and spaces for information, debate, and participation that contain both the potential to invigorate democracy and to increase the dissemination of critical and progressive ideas...

But participation in these new public spheres... require[s] critical intellectuals to gain new technical skills and to master new technologies.7

In some sense, what both authors call for is the definition, and delicate curation, of a digital public domain. In the past, designers and architects have produced (perhaps, even unintentionally) some incredible spaces addressing the public domain. Lina Bo Bardi's elevated Museum of Art in São Paulo, for example, provides a space for physical occupation and organization in its articulation of the shaded plaza beneath. 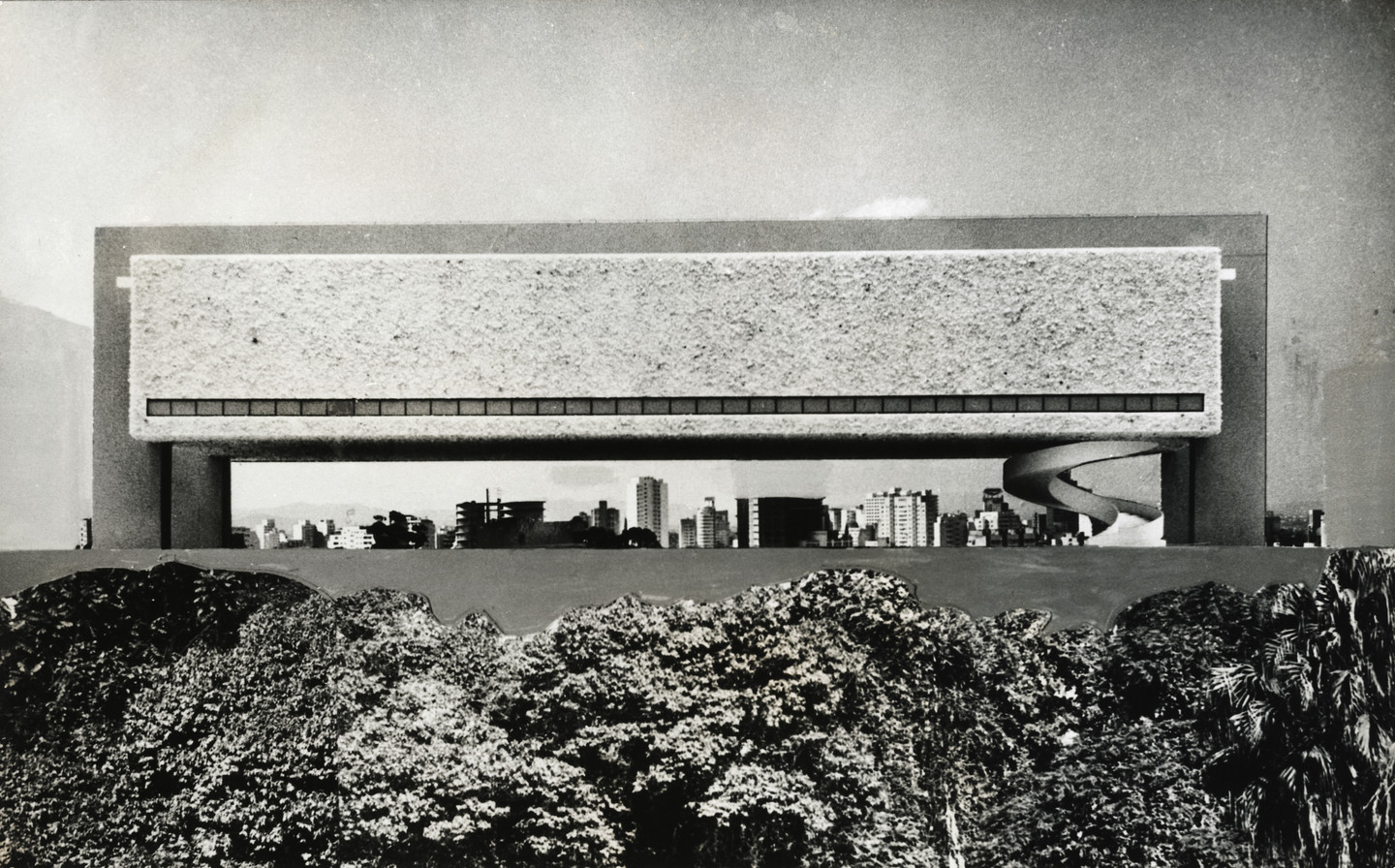 Cultural theorists and philosophers like Foucault and Peter Sloterdijk (mentioned in the notes) have long stressed the pertinence of public spheres— especially as it manifests within architectural space. Now, Karpf and Kellner have implored the "analytic activist" to defend the virtual extensions of public domain, citing the necessity of technical literates to employ proven analytic marketing strategies within novel terrains— outside of the private sector. Kellner's call-to-action is a perfect compliment to Karpf's elaborations on these powerful new methods which shape political movements, specifically the "insightful reading of the present media system."8

However, keeping his words in check, Karpf makes a point of noting the potential pitfalls of data analytics— both politically and culturally. Analytic activism, he says, "requires strategic clarity, a healthy skepticism about where the data provides a biased picture, and a sense of what the data cannot tell you."9 Targeted digital media has— over time— revealed the existence of what Karpf and others have called digital "echo chambers". In effect, this describes the reverberation of like-minded news and content within social media.

According to Karpf, the algorithms used by Facebook and other social platforms tailor their content to serve more "agreeable" content. More plainly, if you're a liberal democrat, your friends probably aren't sharing right-wing news from InfoWars or Breitbart. Unlike radio and broadcast, you control the majority of most of your social channels online, leaving little exposure to oppositional content— any news or opinions that significantly challenge your worldview. Since a growing number of Americans receive their news through these filtered outlets, they have in fact contributed to a systemic process of polarization— specifically in relation to partisan politics and the associated sociocultural tendencies of each party:

While these technologies [social networks] have the potential to expose individuals to more diverse viewpoints, they also have the potential to limit exposure to attitude-challenging information, which is associated with adopting more extreme attitudes over time and misperceiving facts about current events.

This changing environment has led to speculation around the creation of “echo chambers” (in which individuals are exposed only to information from like-minded individuals) and “filter bubbles” (in which content is selected by algorithms based on a viewer’s previous behaviors), which are devoid of attitude-challenging content.10

If we imagine the digital public domain as a virtual platform for the exchange of ideas— a "place of enhanced improbabilities", then digital media is certainly a catalyst and a vessel for virality.11 However, most of the spaces that are sought out online are in the hands of private enterprises. Internet service providers (ISPs) maintain the vast infrastructure of this information ecology; while media platforms (YouTube, Facebook, Instagram, etc.) have dominantly functioned as its curators.12

The implicit role of these different corporations is to maintain a steady acquisition of digital content, while simulaneously shaping its distribution according to algorithmically-driven perceptions of user interest. However, if we consider the failure of these platforms to adequately expose us to a diversity of content— and, more importantly, a diverse audience enabling fruitful discussion— then we're either left stoking our confidence in biased opinions or neglecting and condemning the "other".

Moving forward, there is no doubt that politics will continue to incorporate these interdisciplinary practices as their influence pushes beyond the private sector— hiring technical teams with a shrewd understanding of the possible role emerging technologies will play in the coming races. The public citizen has an obligation, now more than ever, to construct a more wholistic view of the political sphere— and to use that understanding to connect with constituents outside their customary circles.

As the hybrid media economy evolves and diversifies, intellectuals and technologists have an incredible opportunity to connect their peers in unique and powerful ways. Arguably most dire is our need for new and innovative digital public spheres, unfettered by private interests or distorted by algorithmic decision-making. Especially in the face of rampant misinformation and polarization, this virtual public domain is necessary for promoting discussion and, hopefully, resolution. Additionally, I believe communities need to develop free and inclusive outlets for sharing original, accountable, and relevant media and news at a local level.

2 Advertisements, on the other hand, are often built with the explicit intention of infiltrating popular media.

3 Ironically, the word "content" has largely replaced "media" as it becomes more and more devoid of content in an attempt to game the evolving algorithms used by search engines and social media.

6 My comment on "content" (note 3) as well as my appreciation for David's work comes in part from my background in "search engine optimization" (SEO). During my time working for a marketing consultancy, I grew very familiar with these terms and the ways in which companies are able to game the system for organic (not advertised) results in Google.

11 Here, I'm taking Peter Sloterdijk's terminology in describing the Athenian polis— which is used to describe both the city and its people (note 4). Sloterdijk emphasizes in the same paragraph that in order for the polis to function in this way, it must enable a transition from observation (voyeur) to participation (participant).

12 Facebook has often refused to acknowledge its role as a media distributor since most content is shared from other sources.