The Boston Freedom Trail is a major tourist attraction for exploring many of the important monuments and sites of our nation's early history. My collaborators (Alicia Valencia, Hüma Şahin, Mallory Nezam) and I were tasked to address this historical pilgrimage— to observe and reflect on these sites in their past and present contexts.

First, we purchased tickets and set off on the Trail. One of our immediate observations was a feeling of insincerity— the tour felt hokey. It also led us to question the role and meaning of Freedom in the context of the Trail, as well as in America.

Tour guides, often in costume— posing as "ghosts" of 18th-century political figures, lead you through the Boston Common, Faneuil Hall, the house of Paul Revere, the Old North Church... all the way to Bunker Hill (where the trail ends). 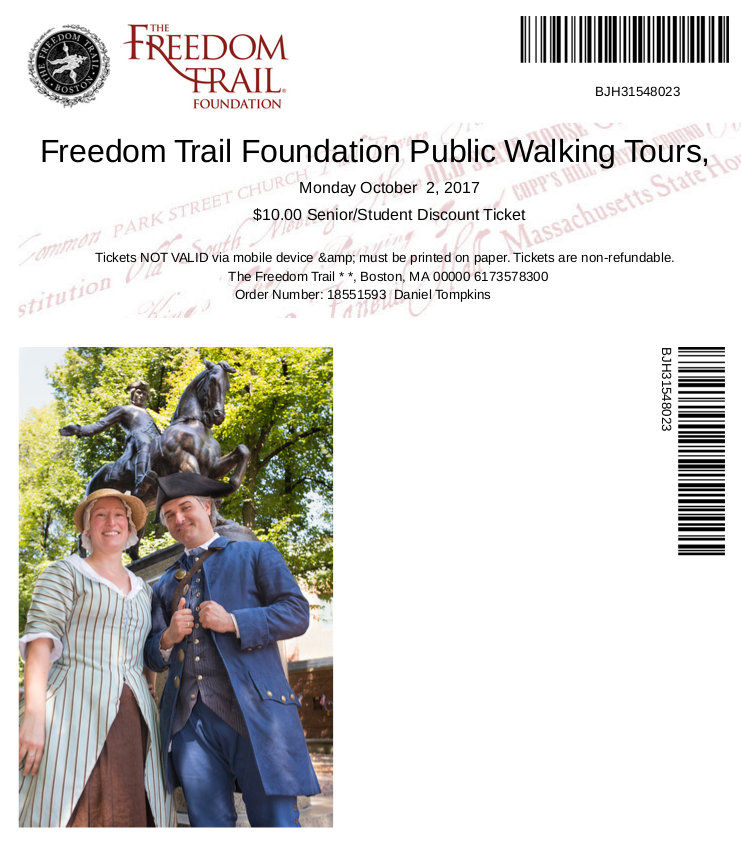 This was the birthplace of American patriotism! These battlefields and memorials— the graves of our country's forefathers— represent our freedom and prosperity!

The concept of freedom while walking the Trail felt lost, perhaps swallowed by a modern Boston. As tourists, the sites did not evoke a profound sense of respect or solemnity, and the suggestion of patriotism felt noticeably contrived.

Most of our fellow tourists were more interested in their phones, or taking away a nice selfie. At one point, the tourist pointed to a bar across from the graveyard that holds Samuel Adams' remains:

Coming from the classroom, we had expected the Trail to offer more tools for introspection— instilling a sense of gratitude for the sacrifices made in the name of freedom.

In our own intervention, we would stir up some controversy. By forcing tourists to relinquish some of their freedom, perhaps we could stimulate a more critical look at what they have to lose.

After some consideration, we decided to approach our project by pairing our initial reactions with the issue of freedom and privacy in tech.

We surrender our data to industry giants like Facebook, Microsoft, Google, Apple, and Amazon everyday. Without so much as a thought, we trust these companies to keep our data safe, giving them incredible powers of surveillance and control.

In return for the use of their services and products, these companies collect hundreds— sometimes thousands— of data points on every customer. This data turns into likes and clicks which translate to sales and even votes.

We would pitch our installation like a hot, new startup. We called our faux company "Freego"— a cheap combination of "freedom" and "go". Our product was wireless freedom. We would install monolithic WiFi antennas situated at intervals along the length of the Freedom Trail, providing free Internet connectivity to tourists. 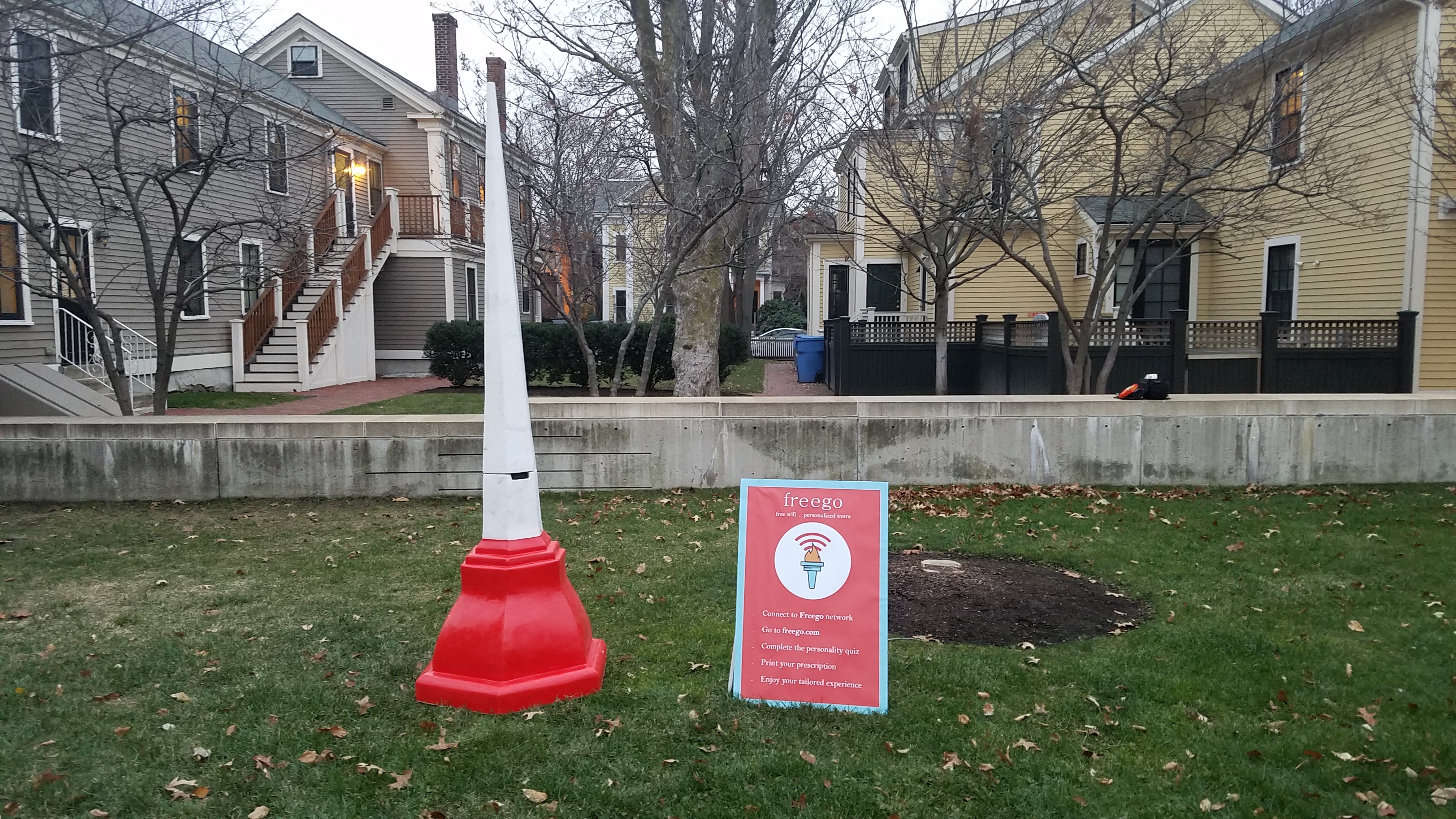 Our prototype antenna, a foam "obelisk" painted to look like stone, was outfitted with a Raspberry Pi and a thermal printer (powered through USB by a mobile battery pack).

To connect to the Freego network, the tourist had to first complete a short, but detailed, questionnaire. The network would act as a honeypot— collecting users' information: carrier, device type, location, etc.— upon logging-on to the SSID. 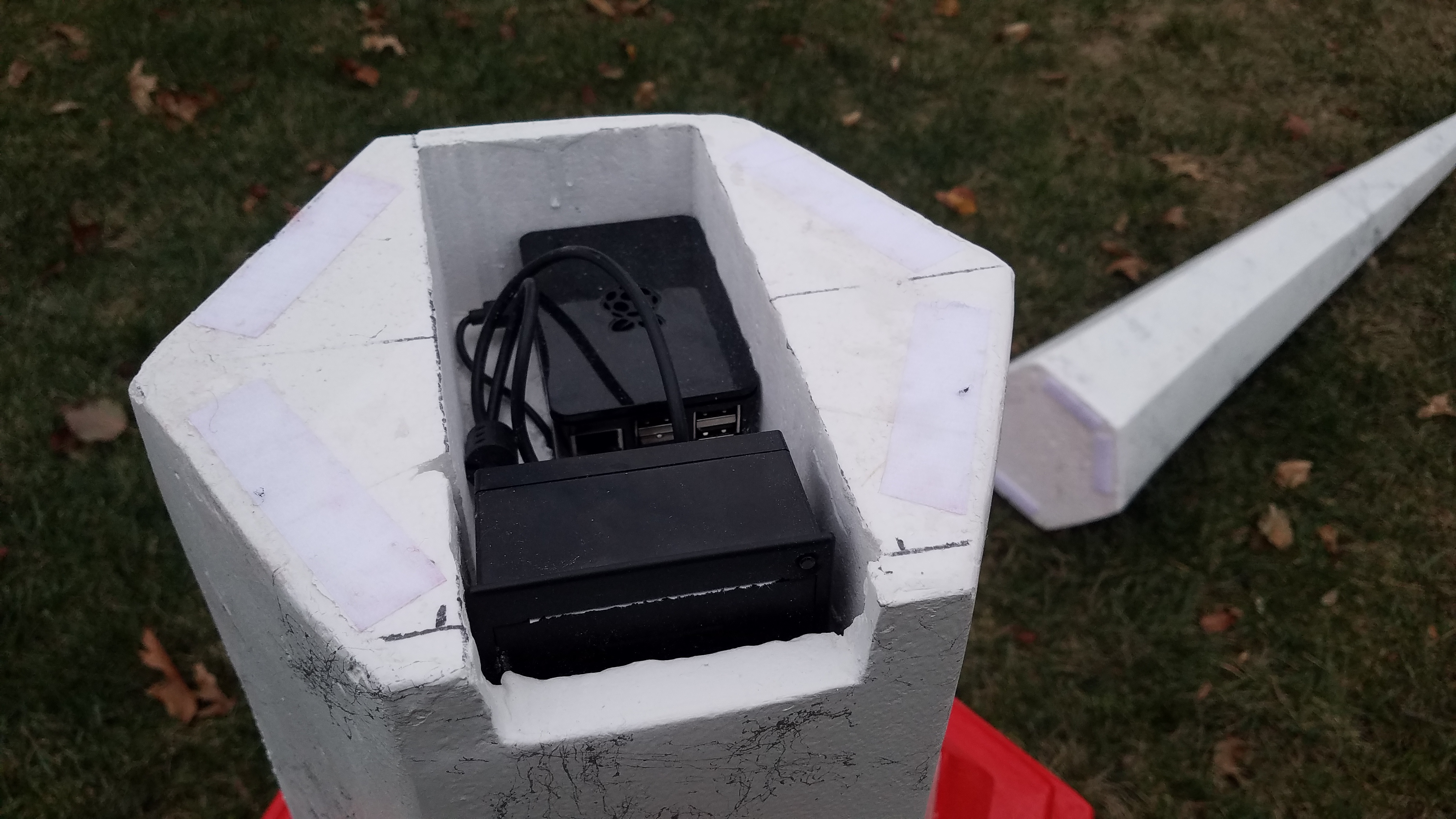 Our killer "app"— the questionnaire— was structured similarly to an official Myers-Briggs Type Indicator (MBTI). After answering the questions, the tourist would submit their responses at which time the thermal printer would eject a small slip from the obelisk.

Similar to MBTI, our questionnaire weighed personality traits in several different categories in order to assign a "sigil". However, instead of categories like sensing/feeling or extraversion/introversion (used in MBTI), our test judged more political preconceptions— such as conservatism vs. liberalism, or nationalism vs. internationalism.

Taken together, the tourist was assigned a Freego "prescription" that dictates their political personality, as well as which unique path through the Freedom Trail they should take. 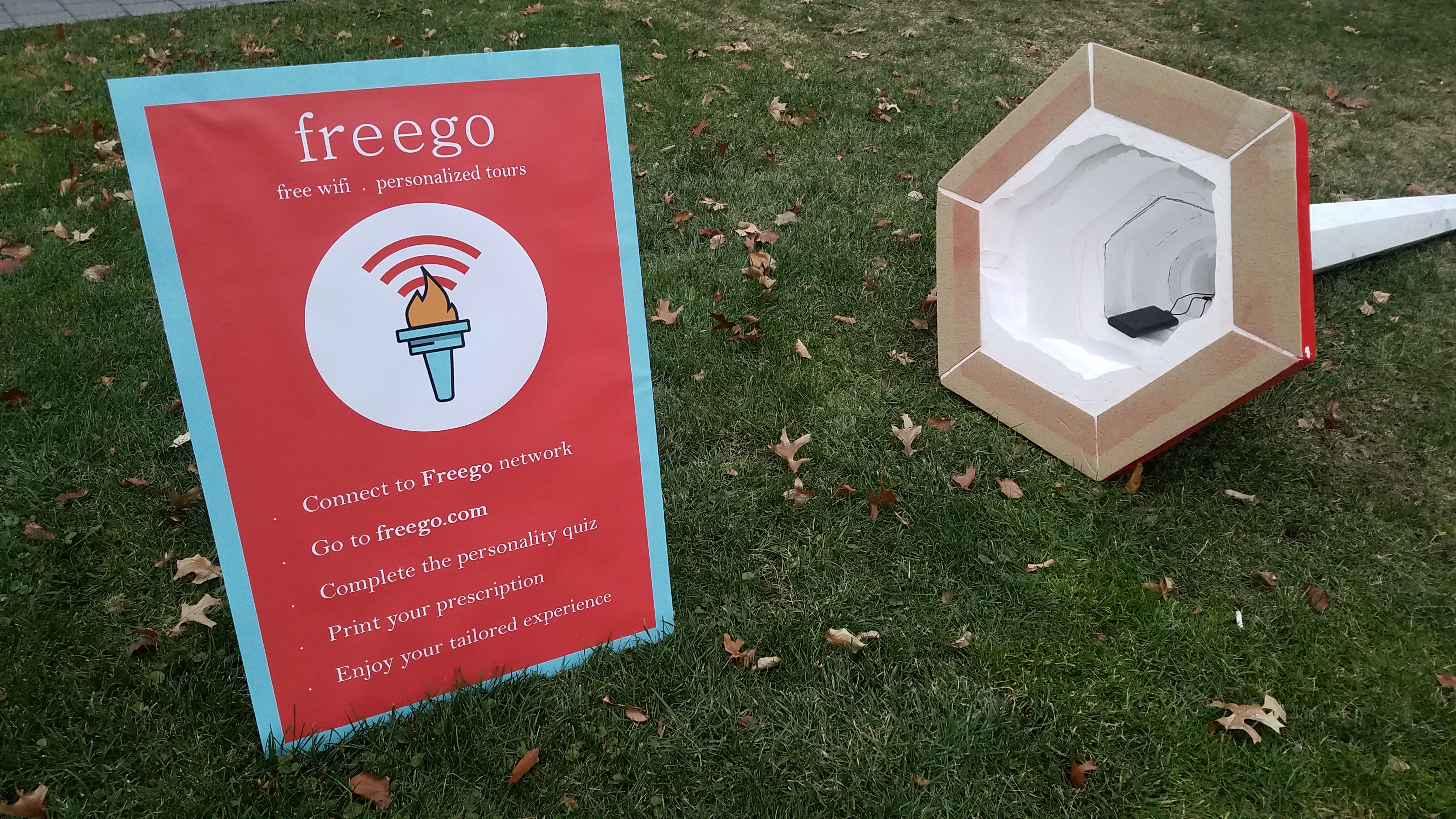 There were eight possible outcomes based on the answers given in the questionnaire:

Each political personality has a unique emblem, a description of their assigned identity type, a declaration of the sites on the Trail that they should see (possibly with some sites omitted entirely), and a set of instructions on how they should approach the tour.

Alas, we never had the chance to do a field study with this project. As a template for how we might begin to think about technology and freedom, however, I think it was a successful project. Thanks for taking the time to read, and please share some comments below.